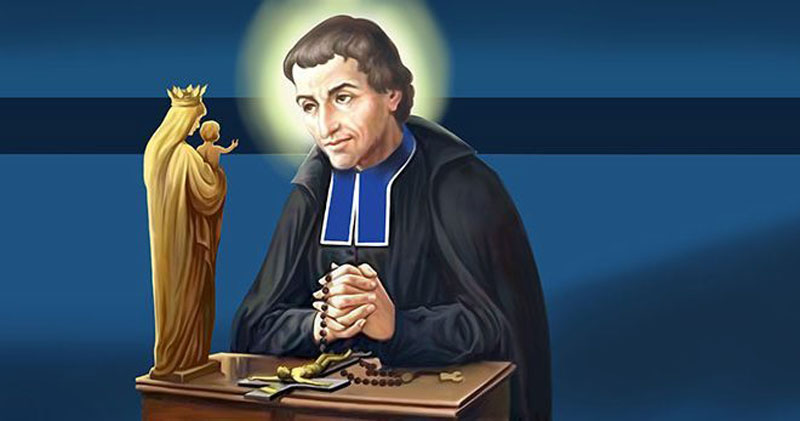 Born on 31st January 1673, Louis Mary Grignion, popularly known as Montfort, grew to be a prophet of his times. He saw God in the poor and gave his life for their cause. In him welled up a constant spring of love, courage, self surrendering service and commitment for the cause of the poor and the down-trodden. The source of this unending spring was his motto-‘God Alone’. He died on 28th April 1716, but his spirit lives on today in the Congregations of Montfort Brothers of St. Gabriel, Priests of the Company of Mary, Daughters of wisdom and the numerous Montfortian Associates.

The Congregation of Montfort Brothers of St. Gabriel, which constitute a religious community in the Catholic Church, was founded by St. Louis Marie de Montfort (1673 -1716). The members of the society are religious men inspired by Jesus Christ, who take the three vows of poverty, chastity and obedience and promise to live in communities having everything in common, and no individual member claiming anything as his own.

The society specially involves itself in the education of children and youth, especially of the poorer sections. The society’s priorities in education are not only academic excellence, but also formation of youth in discipline, hard work, moral and religious values. These priorities are meant to prepare the youth for life by promoting maturity, scientific temper, spirit of healthy competition, cooperation and sportsmanship through co-curricular activities, moral sensitivity to the needs and rights of others especially the poor, religious tolerance and national integration.    The society cooperates with like minded agencies, be they Governmental or otherwise, to develop healthy, God fearing personalities and leaders for the nation through the process of Human Resource Development.

Though the Society lays great emphasis on formal education and greater share of its manpower and resources are invested in it, it is also actively involved in the field of technical education of youth. Involvement in the social sector, working at the grass root level, through social work and social activism for the conscientizing and upliftment of the poor, the marginalized and the oppressed are also integral parts of its mission.